From Minecraft Wiki
Jump to navigation Jump to search

For a complete list of hostile mobs in Minecraft, see Category:Hostile Mobs.

Hostility is a behavioral game mechanic applied to several mobs in Minecraft. 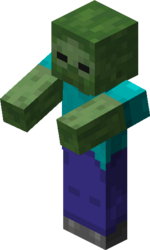 A zombie is one of many hostile mobs.

Unlike neutral or passive mobs, hostile mobs will usually attack a player on sight whenever they come within the mob's detection radius (typically within 16 blocks of the mob). When a player is detected, the hostile mob will turn to face a player, and then begin to chase and attack them. A hostile mob will never retreat, and it will continue attacking until either them or their target, dies.

Hostile mobs may also attack other mobs they encounter. One common example of this is when zombies invade villages to attack villagers at night. It's also possible for two hostile or neutral mobs, who would not typically attack one another, to fight among themselves. This is commonly caused when an arrow, shot by a skeleton, accidentally hits another mob while they are trying to hit a player. Music Discs are obtainable through killing a creeper by having a skeleton's arrow deal the killing blow.

Certain mobs may be neutral in some situations, but hostile in others. One example of this kind of mob is a polar bear. An adult polar bear can be neutral, but it becomes hostile if one of their cubs is nearby a player.

Retrieved from "https://minecraft.miraheze.org/w/index.php?title=Hostile&oldid=473647"
Categories:
Cookies help us deliver our services. By using our services, you agree to our use of cookies.